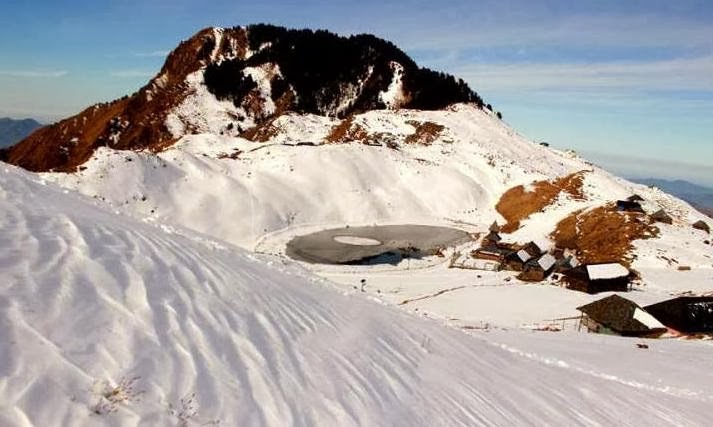 So one friday night as always I was surfing all the places on earth that can possibly be traversed :) and suddenly realized that I never saw snow on montains and thats it. Checked out all the winter treks which can be done on weekends+1 day and got one..yes the Prashar Lake in Himachal. Wow the first look on some blogs and Indiahikes site were amazing.

Dindn't gave a second thought and just booked the trek through IndiaHikes(oh yes they are the best hiking group). Made all my itineray and silently waited for the time (Friday) to come. As the time was coming nearer, my excitement was on top of the world. 4 days before the trek, other trek members(all strangers) contacted each other and 2 of them contacted me too and we all decided to board the bus from same place(from Delhi). Hmmm allz set, just time has to come..tic tok tic tok.........


And here comes the bummer....a day before leaving, we got a mail from the Group about the very bad weather at the trek site and heavy rain and snow. IndiaHikes are very professional and they never take chances so the trek got canceled and yes all the trekkers were disappointed like hell...and so do I.

I am a traveller not a tourist, so why can't I go ahead and board the bus and reach the starting point and see what's there to explore....well thats the thought which came to me after the hell lot of disappointment. I contacted the other two who were suppose to travel from delhi and all agreed. And here it goes......

We met at the metro station and went to the place where bus suppose to come and started chatting..about all possibilties that can be explored, what if we met with heavy rain or something goes wrong...but then all were traveller and knew when to go ahead and where to stop!!

After an hour, bus came....... the black Manali Mail...and we boarded. Except three of us ..all were honemoon couples. But who cares!!!! :) With lots of hope (to saw snow and trek on it) the journey finally started.... 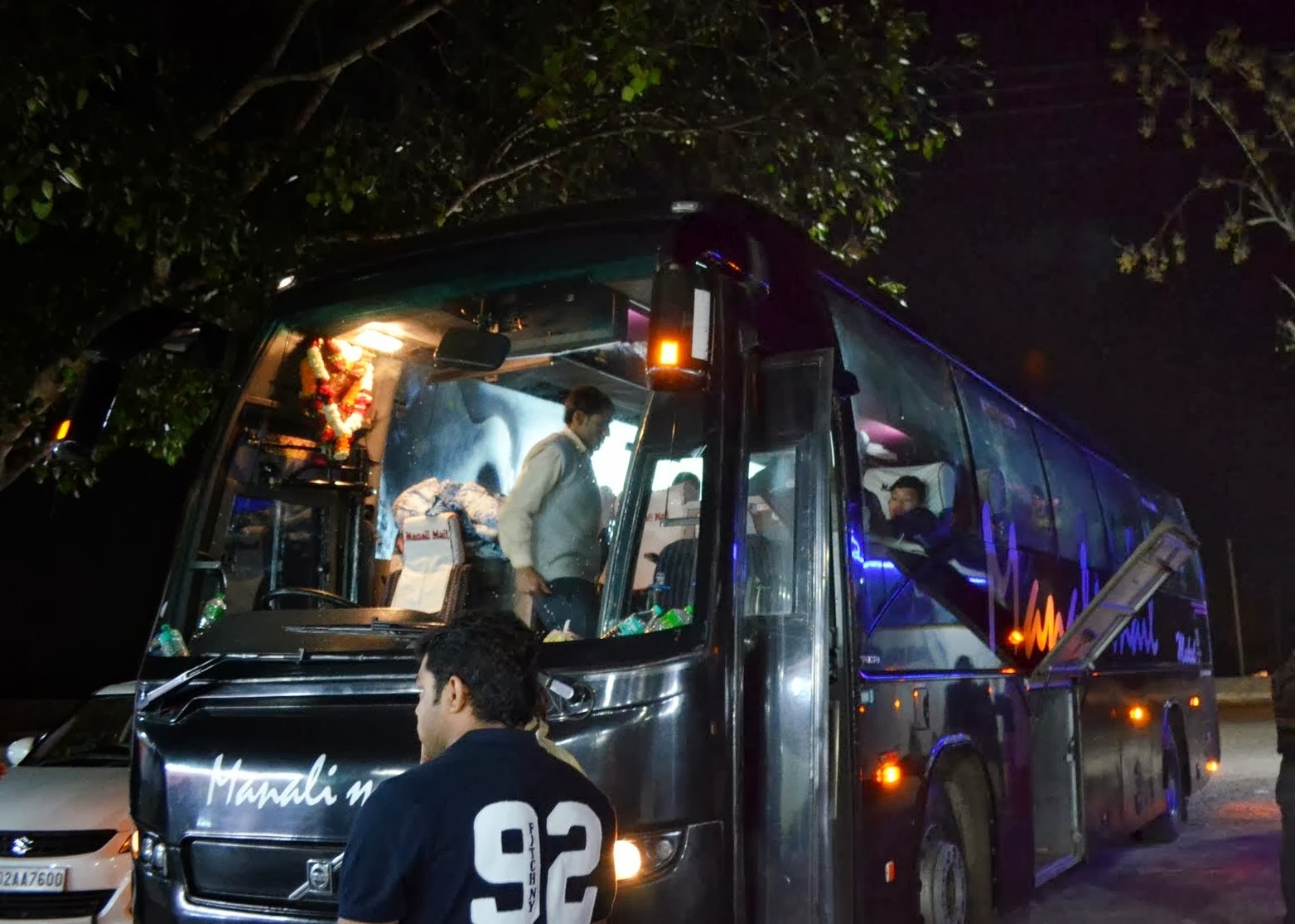 After 9-10 hrs later, we reached Mandi and deboarded and went to the guest house where we met 5 other trekkers who came there a day before and disappointed like us.. but we all were very hopeful to see each other and discussed the plan. And I came to know that we are going to Trithan valley and trek till Jalori Pass and can trek on snow instead of going to Baggi village and prashar lake(4 feet snow, impossible to trek on that much fresh snow).

All agreed and after a quick bread butter-chai breakfast , we(2 gals and 6 guys) started our journey to Trithan. Reached after 2 hours, in between came across beautiful landscapes and the various bridges on the river flowing on one side. We stopped for one of them and clicked some shots. 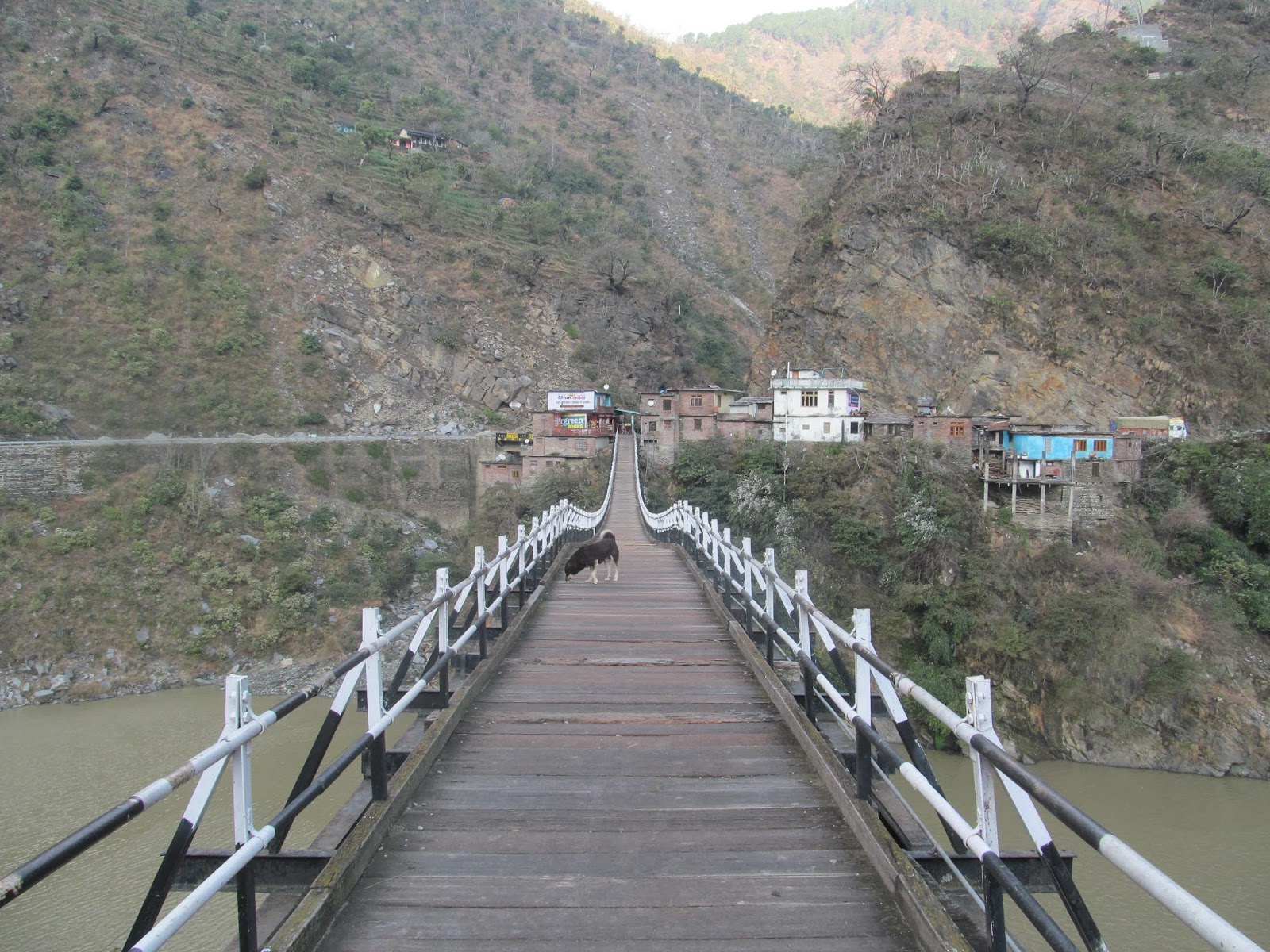 And here we come and the first sight of snow. During journey I came to know I am not the one dying for snow, and my excitement was no where near to the other girl's. :) :) and I respected that as she came from Mumbai and snow...forget that , they cant even have that Delhi chill :)

After crossing the river with the great pully carrier, we reached the resort and had very tasty brekfast with view of snow clad montain at one side and vigorously flowing river at other. Wow...just being there was amazing. We all enjoyed our breakfast and clicked some shots. After almost an hour later we moved for the place from where we were suppose to start the trek and reached there pretty soon. And on the way we encountered some snow ...quite ruggy, balckish... atleast I was not very happy with that.

Bt the moment we reached and stepped out of the vehicle, a beautiful sight was waiting for all of us....oh yes the Barf wala Snow was all around, though road was still not totally covered but stilll.....I can play with snow...:) :)  and we played ... :) and then started trekking. 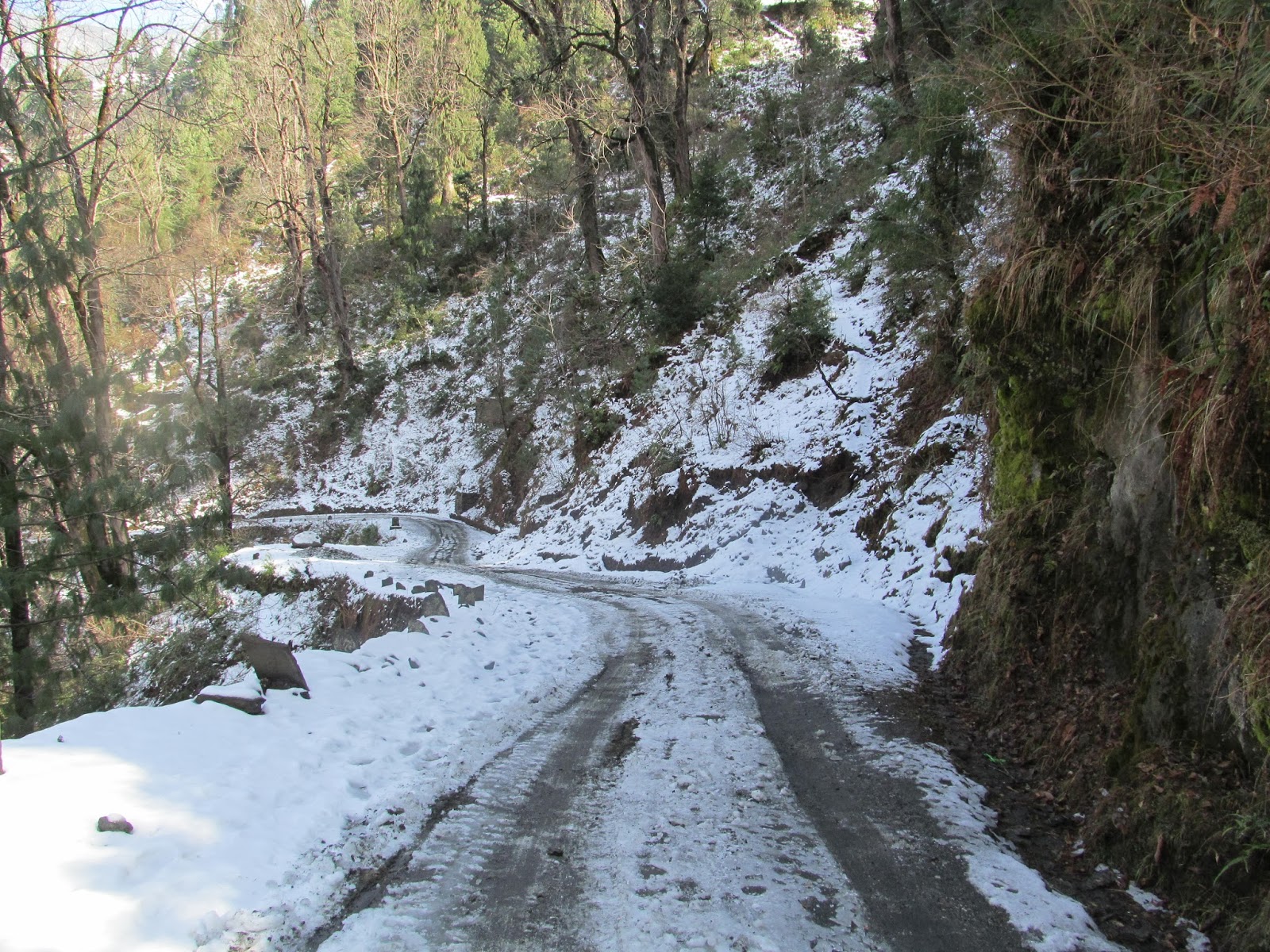 As we stepped further the landscape changed , snow covered road, getting more narrower and greenery was covered with WHITE. Well it was really eye catching and I capurtued everything in my mind before clicking it on cam. 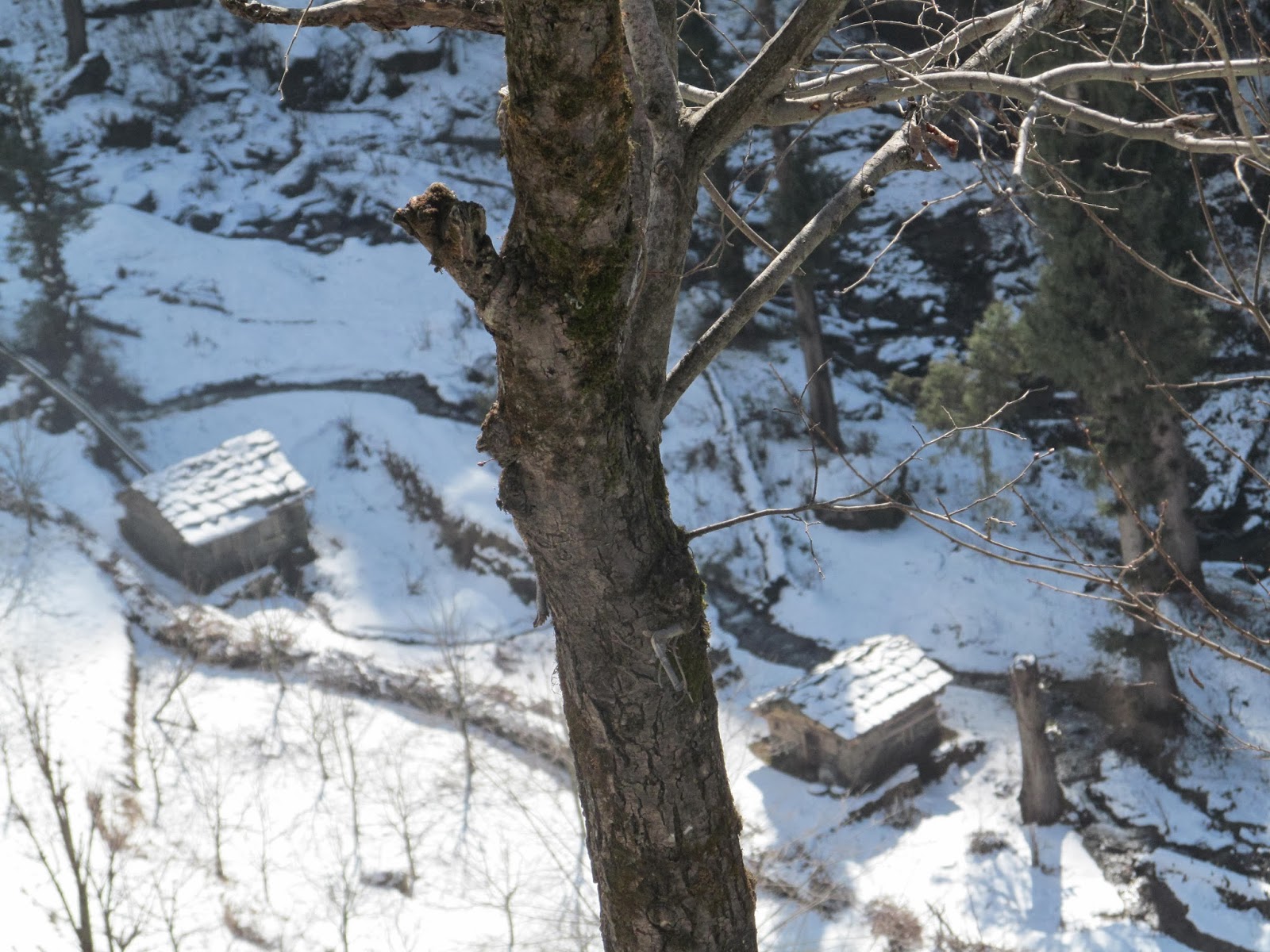 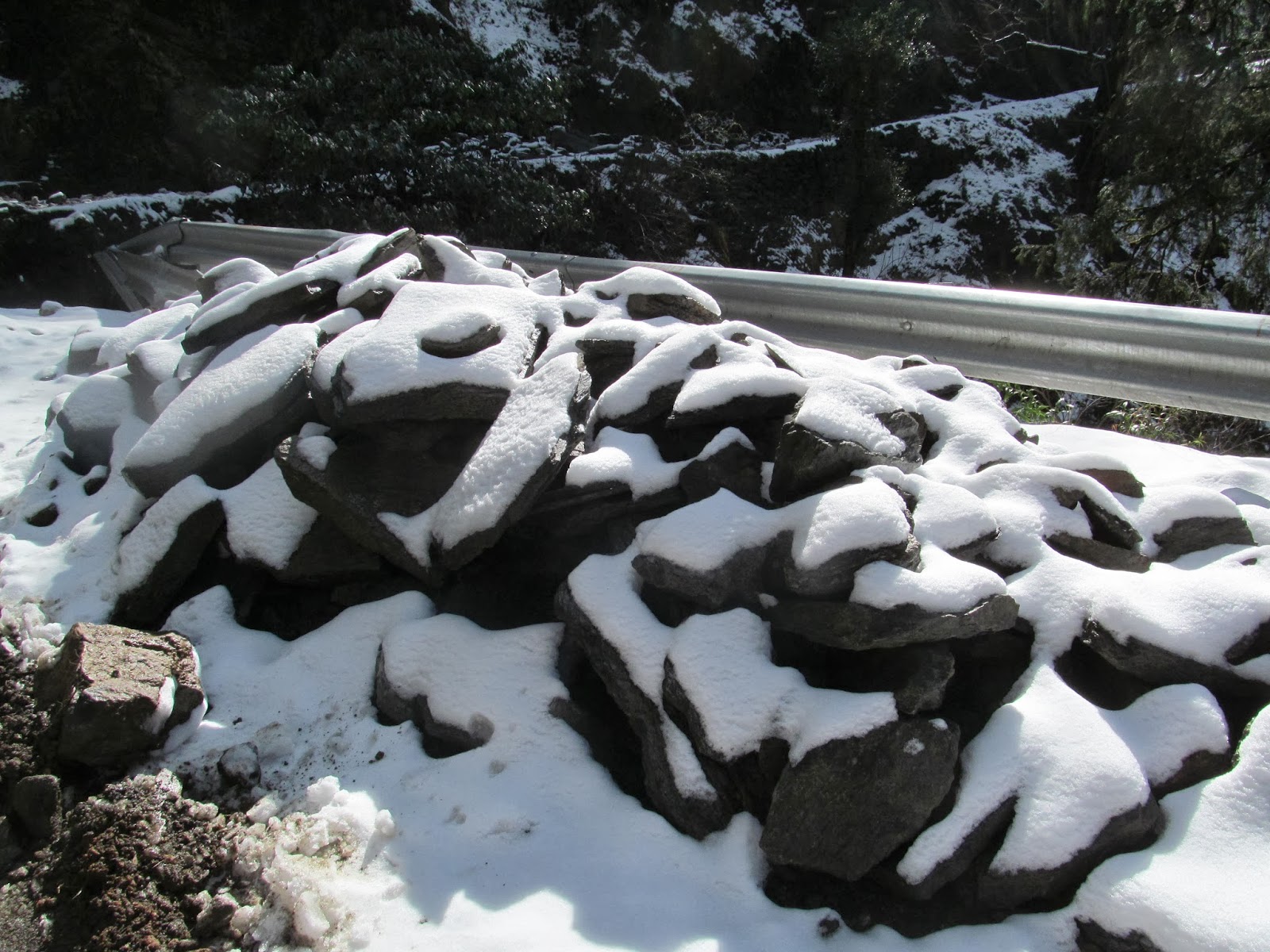 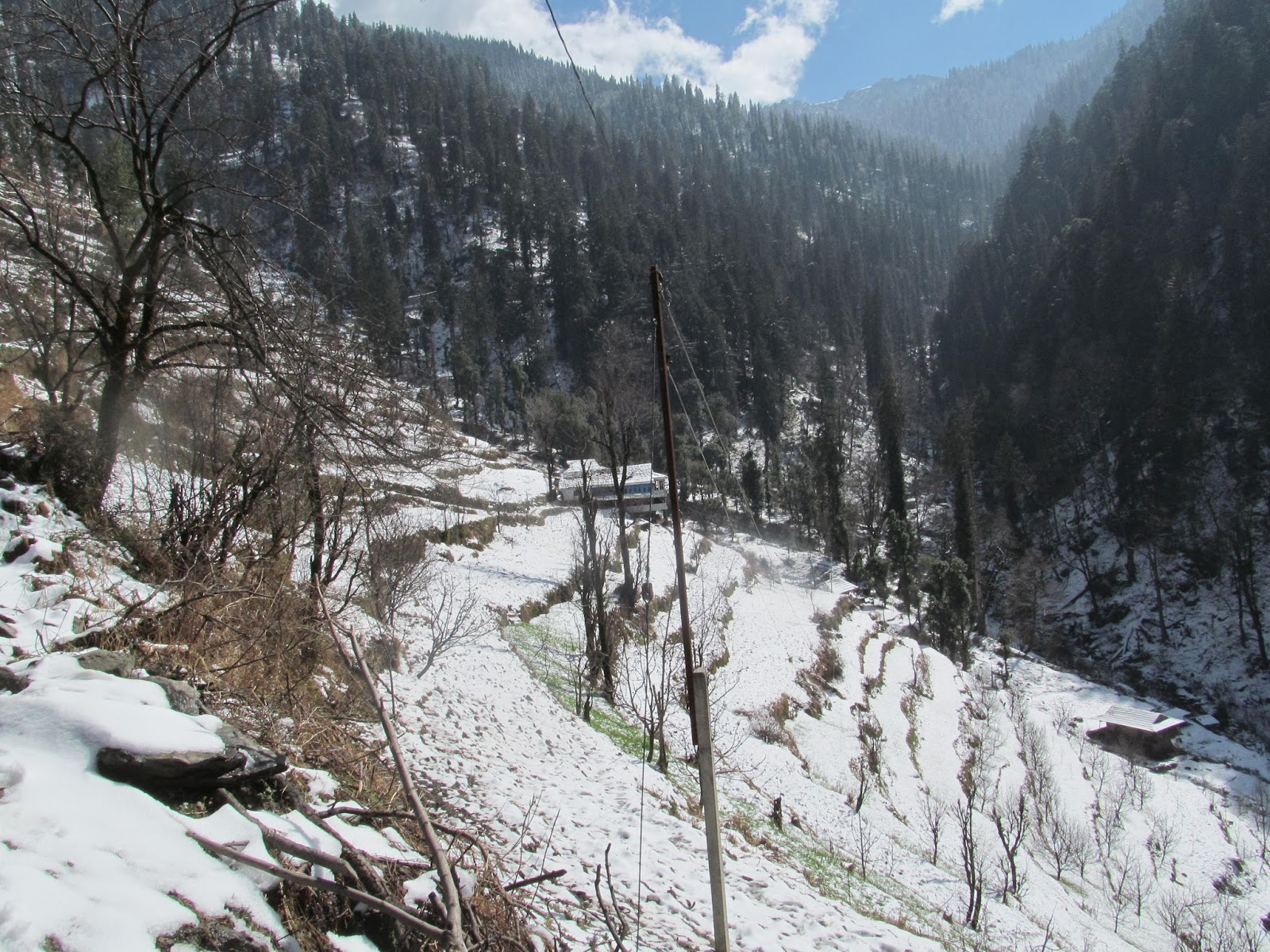 Air got thinner as we climed up and breathing become heavier..but we moved on and on and walked on snow for kilometers. The snow now was almost of 2 feets and somewhere more than that and was really difficult to trek on that considering no experience of snow trekking. But after 2-3 hours, we finally reached at the top of Sojha village from where the snow was almost 3 feet and more near to pass. We all stopped at the last tea shop. 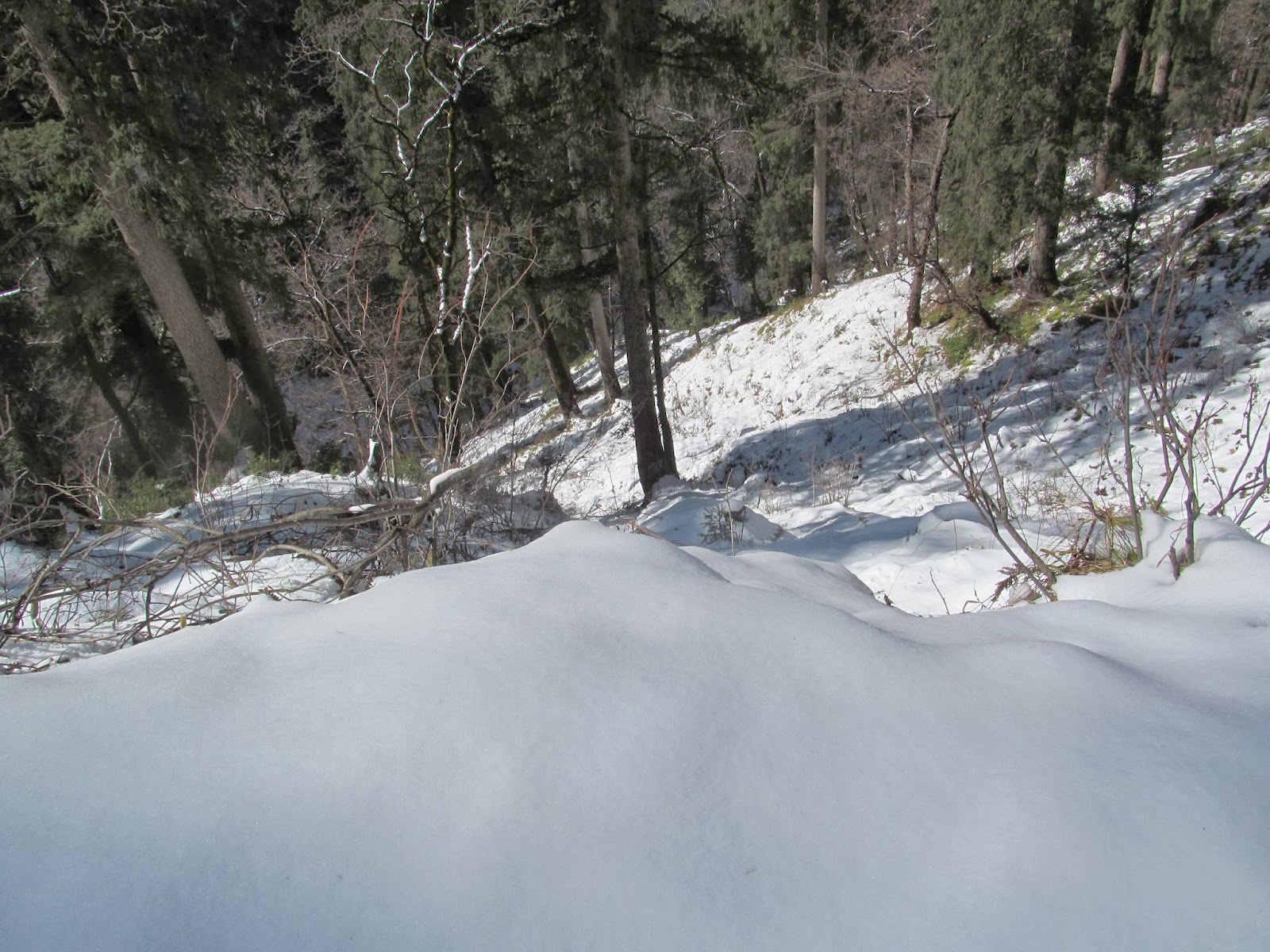 A sigh of relife, a breath to remember and a sense of achievement(LOL..ok we haven't trekked till north pole..but after a canceled trek , completing our own trek is a bit of achievement :) :)

And what else....yes the Maggi...Omlette and CHAI.....thats where all trek got to be end!!!! No no no....we have to go all the way back and now the way is totally different and the real trek starts here. Its not a road , these are all small path down the mountain(pagdandi) full of slippery snow...my god after a first look, all were surprised...is this is the way we are going down.. ????? on every face. :) :) 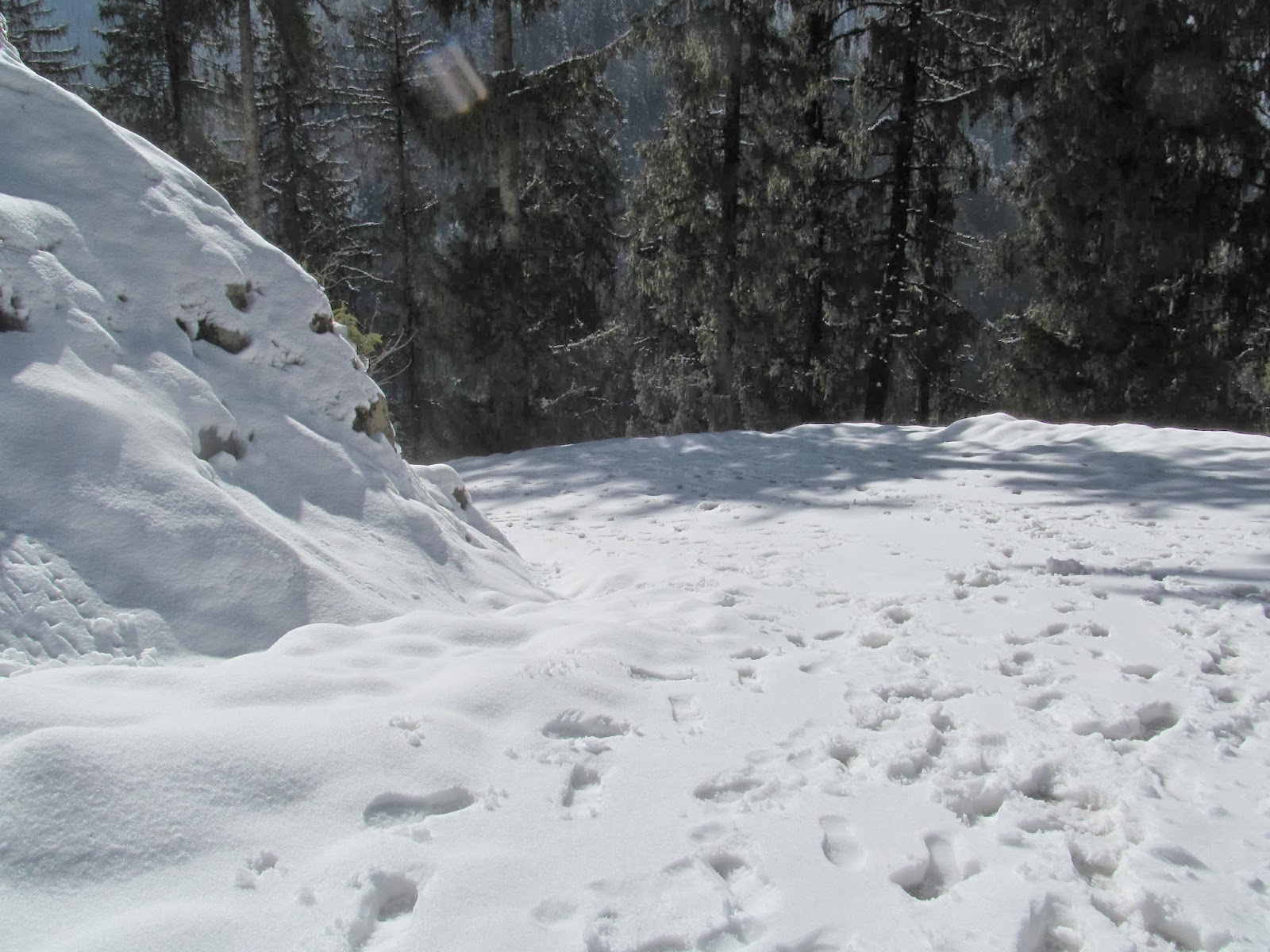 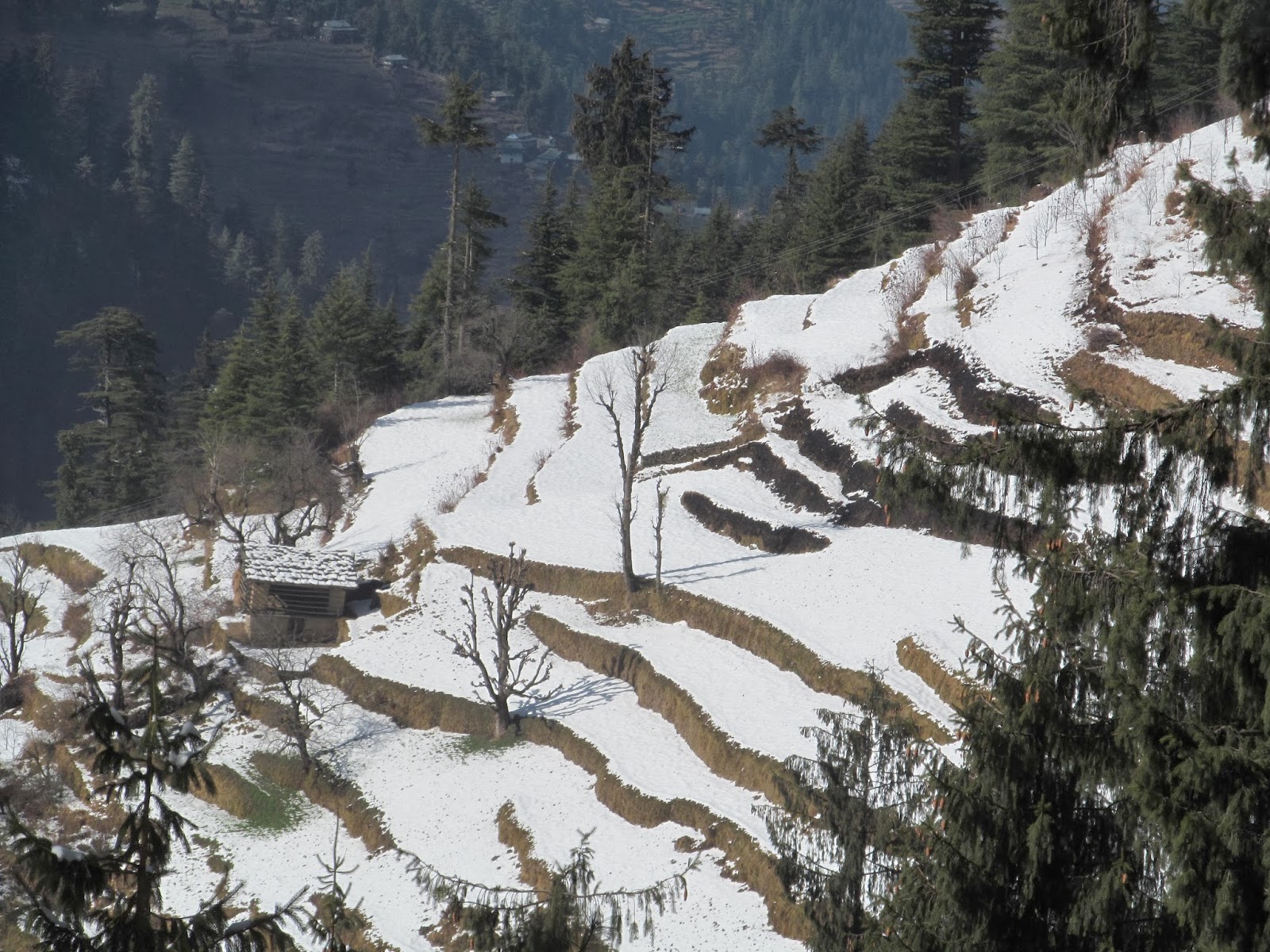 And yes that's the way...so what darr ke aagey jeet hai sochkar we all started and slipped and hands got frozen so many times...we walked, crawled, slipped, had free snow slides and what else...the beautiful, amzaing nature's painting all around. Small huts with snow clad roofs, white trees and sound of some small streams...well its more beautiful that I can ever explain. 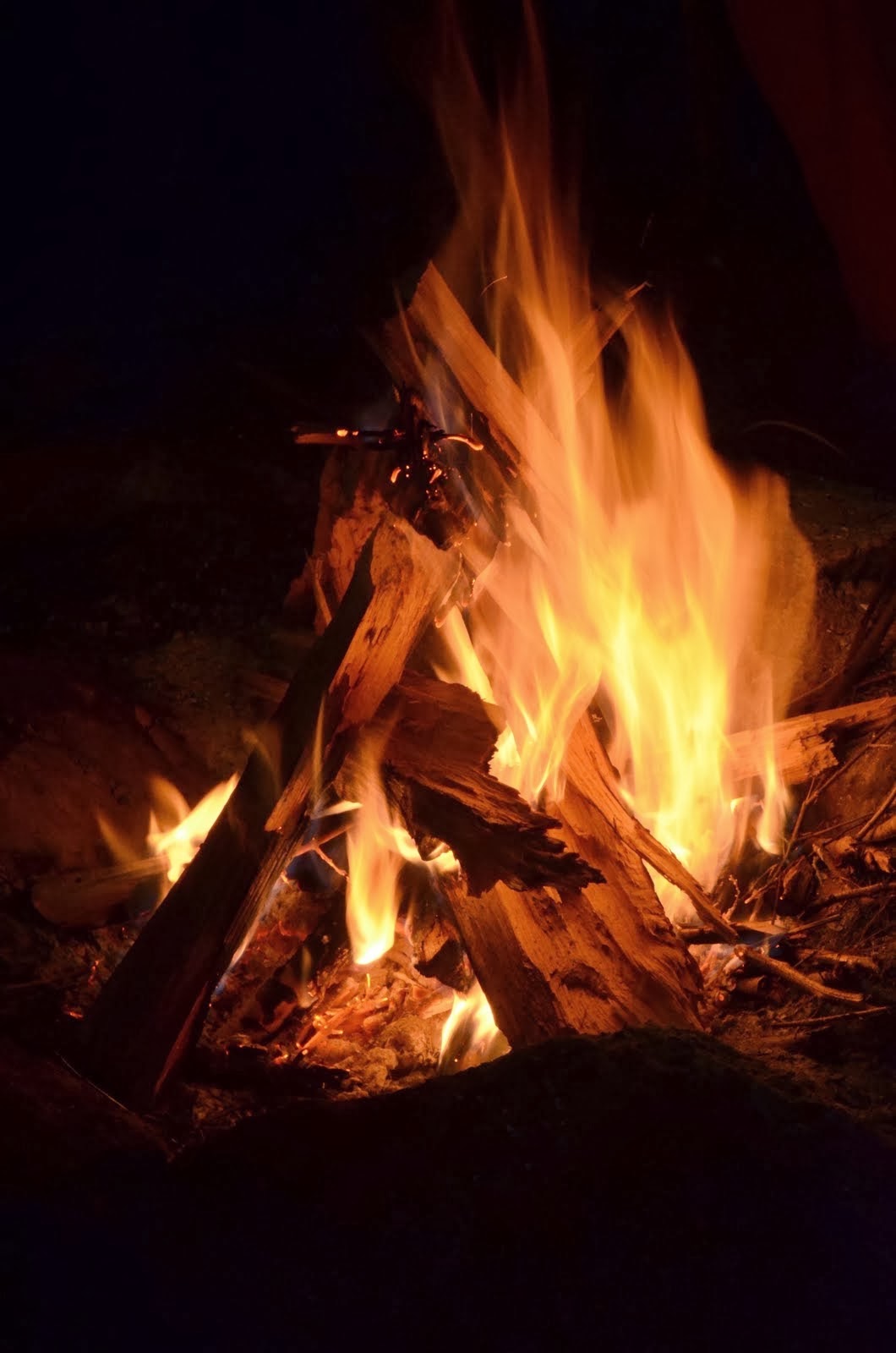 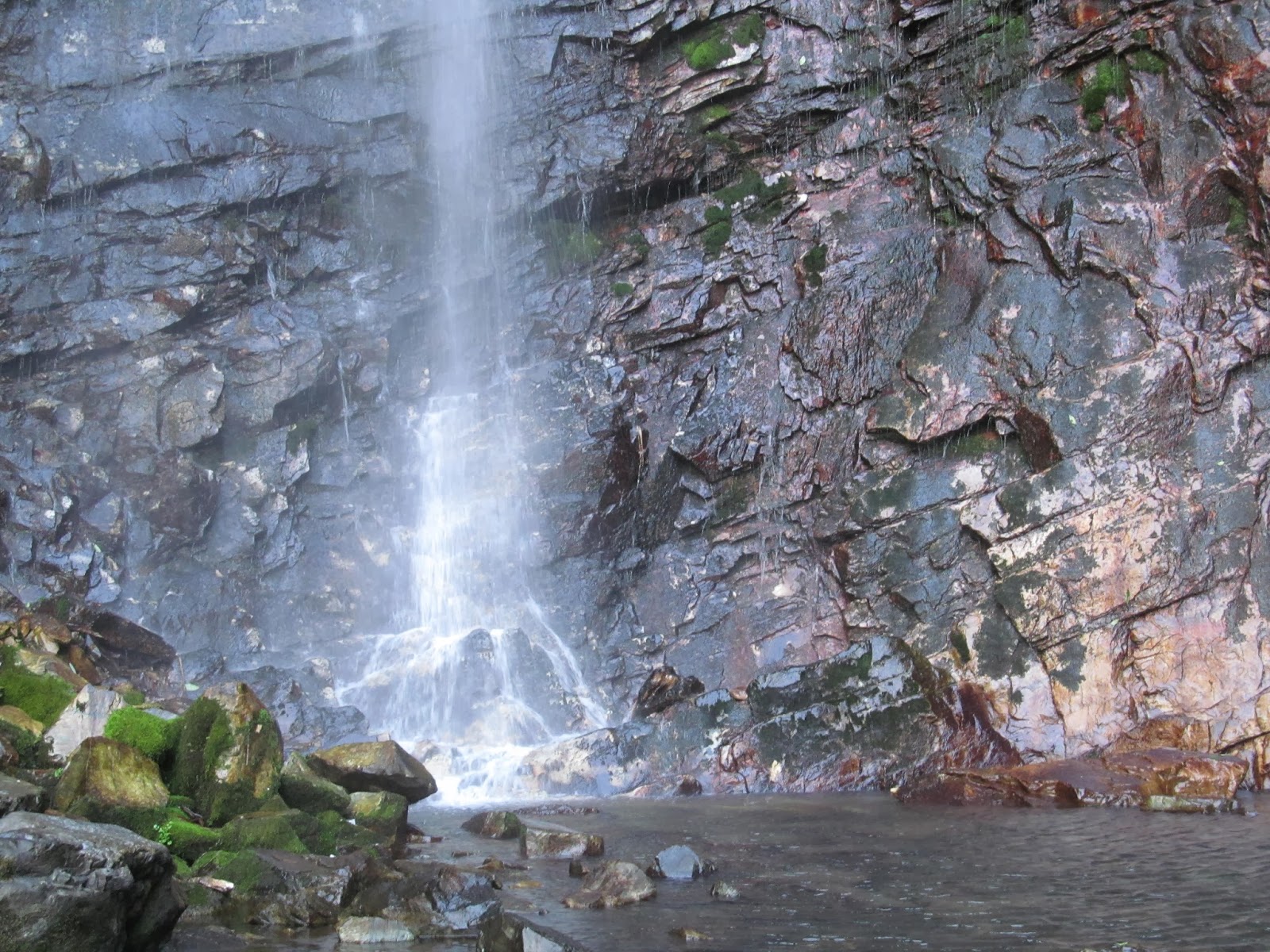 Finally we all made our way back successfully. A bonfire till late night welcomed us at resort back in Thrithan and next day we went for a small trek till a waterfall. The path was very risky and we need to put very small steps at some places but when all are like minded people, you will never back out. And we made out way till the waterfall and it was worth taking the risk. 3 sided mountain, sun rays were not reaching till that place and it was ice cold there. But I loved it there, wanted to sat down for hours but have to return the same day and time didn't permitted to enjoy the serenity of that place. It was just we '8 trekkers' and the mighty fall , montain and trees. Loved that moment, loved the place..loved everything. With a bit of heavy heart we said goodbye to this place and moved back, reached pretty early on the way down and then went back to Mandi to catch the return bus.

Yes time came to get parted. We all 8 super trekkers :), from all around India (Delhi, Mumbai, Gujrat,UP) spent the lovely time together and became friends. Most of us promised each other to join other treks and on that promised note we boarded our buses...

Whats the best thing you get while travelling...beautiful people with great stories and  Memories to cherish forever......................some plans better get canceled and go unplanned. :)